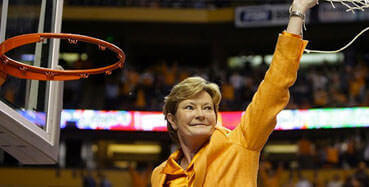 Pat Summitt, who retired as the winningest coach in Division I college basketball in 2012, died Tuesday morning at the age of 64. In 2011 Pat announced that she had been diagnosed with early onset demntia.

“Since 2011, my mother has battled her toughest opponent, early onset dementia, ‘Alzheimer’s Type,’ and she did so with bravely fierce determination just as she did with every opponent she ever faced,” Tyler Summitt said. “Even though it’s incredibly difficult to come to terms that she is no longer with us, we can all find peace in knowing she no longer carries the heavy burden of this disease.”

Cindy Best also attended the University of Tennessee where she met Pat and they became friends. Cindy played field hockey for the university and when Pat was a graduate assistant, she would help drive the team to tournaments.

Cindy and The Best Law Firm have previously donated to The Pat Summitt Foundation: Find A Cure For Alzheimer’s which was established by Pat in 2011. There mission is to, “Advance research for prevention and a cure; to provide hope, care, and critical support for patients, caregivers and families; and to educate the public on the impacts of Alzheimer’s disease and the urgent need for a cure.”

A public service is to be held at the Thompson-Boling Arena, on the campus of the University of Tennessee-Knoxville on July 14.

Our thoughts are with her and her family.

To learn more about The Pat Summitt Foundation: Find A Cure For Alzheimer’s, Click Here.